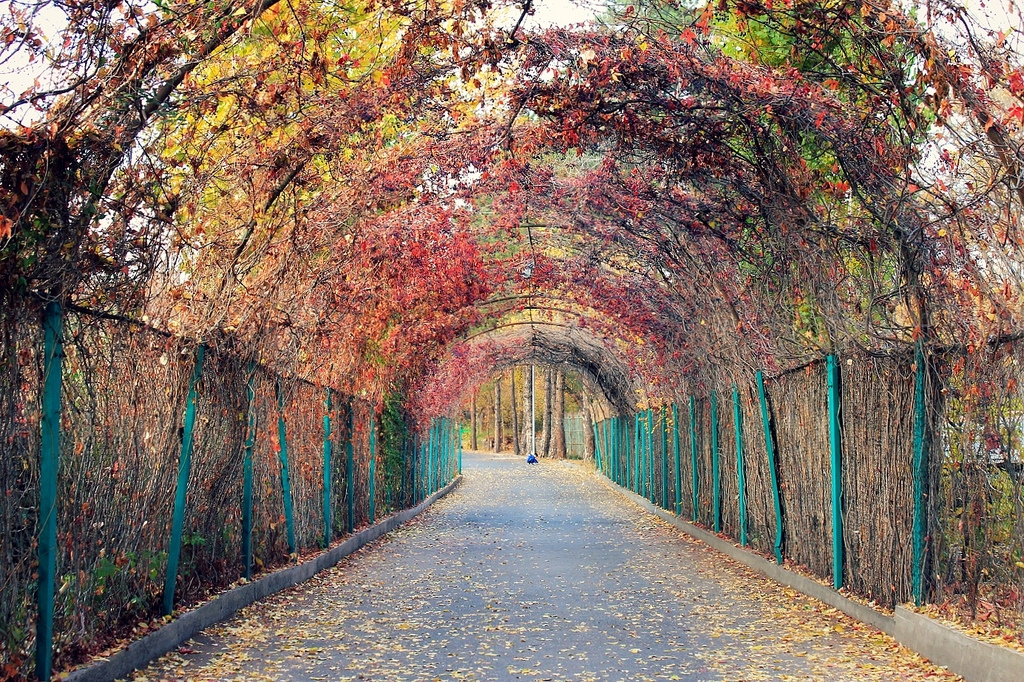 Botanical garden occupies 90 hectares of land in the elevated north-eastern part of the city along the highway Yerevan-Sevan, between the districts Nork and Zeitoun. Landscape of the garden belongs to the rocky sagebrush semi-desert foothills surrounding the Ararat valley.
It holds rich herbarium as well as the collection of tress and shrubs in the Botanical garden has more than 1070 species, varieties and garden forms, dendrite flora of Caucasus and Cyprus, North America, Europe, Siberia and East Asia. The collection of Armenian flora includes around 200 species of endemic, rare and declining plant species, and provides a basis for the study of Armenian flora, and the ecological interactions of species, in a relatively natural environment. An amateur can see oak and Crimean pine, North American tulip tree, Polish larch and Manchurian walnut.
In the greenhouse collection, there are growing about 1000 species of woody and herbaceous plants. Here is growing a strong old “Grape” type liana and feijoa with beautiful silvery-red blossoms in spring and edible aromatic fruit. Next to them grows avocado, which has been circulated in Central America, its fruits taste similar to olive oil, rich in vitamins and fats. There are different types of blossoming orchids from Japan and China, Mexico and the Himalayas please the visitor with freakish forms and unusual flavor.
During its 75 years, the Yerevan gardens and its two other counterparts have introduced a wealth of landscaping to Armenia that have contributed to the economic well-being of the country. One of its important goals is the creation of rare and endangered plants (there are nearly 400 endangered species in Armenia), along with the dissemination of botanical knowledge and ecological education.
Hardships brought by the conjuncture after the collapse of the Soviet Union made its impact on this important resource. An energy crisis caused a considerable decrease in the amount of introduced plants and different floral collections.
In the rose collection of the garden, there are more than 300 varieties of roses, belonging to 14 classes; dark purple-red fragrant “Princess of Bern”, “La France” with deep-terry silvery-pink flowers is very fragrant, pure white “Yvonne Rabie” with strong aroma and finally precious “Zonder-Meldung” with bright fiery flowers.
Botanist-researchers visiting the Yerevan Botanical Garden can apply to the services of a library containing over 28,000 volumes, which is located in the territory of the Institute of Botany Academy of Sciences of Armenia.  It contains an abundantly represented literature on the flora of Armenia, the taxonomy of plants, geo-botany, biochemistry and other disciplines. Seed Laboratory has a rich exchange fund of the seed flora of Armenia. The Laboratory cooperates with many botanical institutions of other countries.