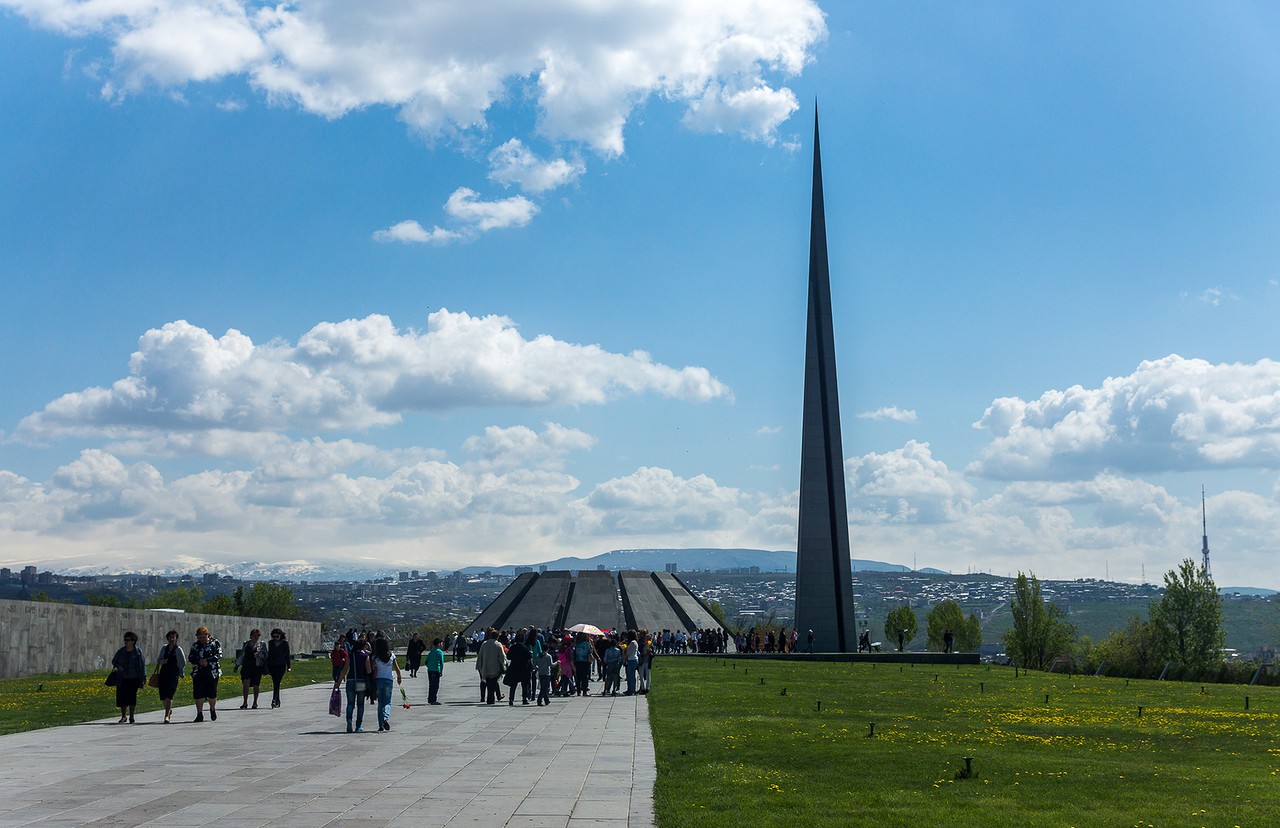 On the right bank of the river Hrazdan in Yerevan, at the top of the hill called Tsitsernakaberd (Fortress of swallows), in front of Mount Ararat stands the memorial to the victims of the Armenian Genocide of 1915 perpetrated by the Ottoman Turkish government. In a huge sprawling complex 12 columns stand symbolizing the 12 provinces of historical Armenia leaning on the eternal flame in the center to form a sort of crypt for the dead without burial. Next to it rises a column  of 44 meters to the sky symbolizing the rebirth of the Armenian people, divided inside into two parts (major and minor) symbolizing the two Armenias: the historical and current (Western and Eastern). In the 100m wall called Sgo Pat (Wall of mourning) are carved the names of cities and villages of Western Armenia martyrs.

Next to Genocide Museum there is a planted parcel with fir trees to the memory of the victims by the personalities of several countries among which John Paul II, Jacques Chirac, Boris Yeltsin, Arnold Schwarzenegger and many others. Each year on April 24, the day chosen symbolically to commemorate the date (day of the extermination of the Armenian intellectuals in Istanbul (Constantinople) the inhabitants of Yerevan, as well as all regions of Armenia, the diaspora and foreigners visit the monument to pay homage to the victims by placing flowers around the eternal flame.

The Museum of Genocide

The Genocide Museum was opened in 1995. Thanks to an exhibition of photographs and archival documents this small museum gives a concrete idea about the presence of Armenians in their historic territory before 1915 and represents various aspects of genocide (deportation, extermination, destruction of cities and towns, removal of historic sites and memorials).

If you don’t know much about Armenian Genocide, you may be shocked a bit in the Museum of Genocide. And we don’t recommend children and pregnant women to visit the Museum.