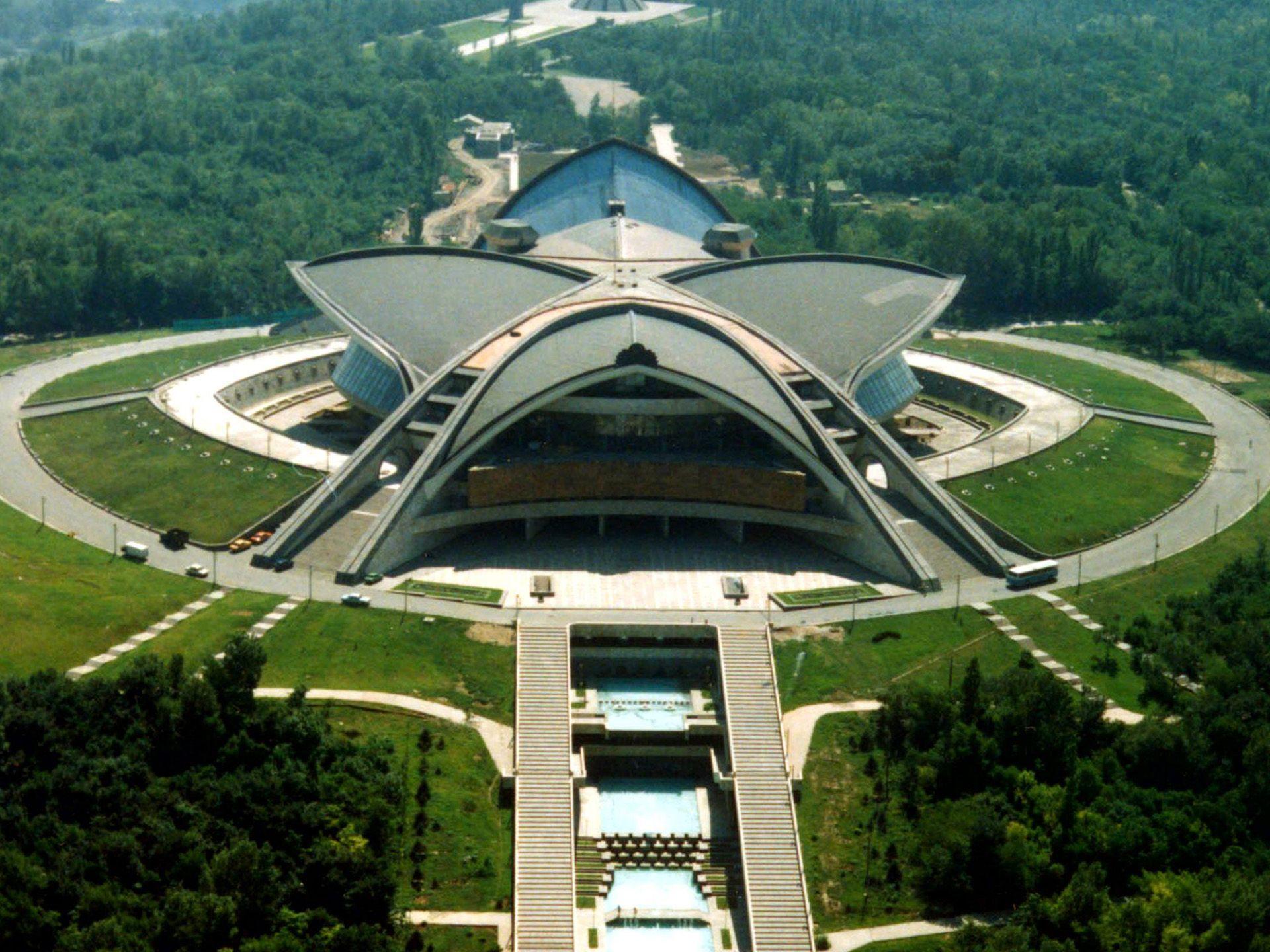 Sports and Concerts Complex is located on a hill in Tsitsernakaberd Park. Parkland and the picturesque valley of the river Hrazdan supplement the volume of the complex.
The complex was opened in 1983, but forced to close within a year and a half after a fire burst in 1985. A renovation process took place until the end of 1987 when it was ready again to host concerts and sport events. Architects were K. Akopyan, the ASSR National architect Arthur Tarkhanyan, H. Poghosyan, S. Khachikyan, G. Mushegyan, engineers I. Tsaturyan, G. Azizyan, M. Aharonyan, sculptor Ferdinant Arakelyan. In 2000, the complex was named after Karen Demirchyan, First Secretary of the Armenian Soviet Socialist Republic from 1974 to 1988.
The Sports and Concerts Complex, also called Hamalir, is a unique architectural construction, which is in the centre of park Tsitsernakaberd. It precedes the Memorial Monument of the Armenian Genocide. Its futuristic shape of a Reborn Phoenix – is symbolic of the nation that rose from its own ashes. A cascade of staircases and fountains connects the Complex with the Kievyan Bridge and transport communications. The ambiguity of the forms and several eclectic volume-spatial composition of the structure are determined by using long-span shell structures overlapping the halls and relying on powerful pylons.
Sports and Concerts Complex possibilities are diverse, and the quantity of given services grows every day. The complex consists of two big halls; the concert hall and the sports hall, in addition to the “Hayastan” conferences hall designated for political summits with a huge space, which gives the facility to organize fairs and exhibitions. The hall with 7000 seats for sports and entertainment performances is located above the lobby, with which is connected a system of stairs and escalators. Here is also located «Ice queen» – the ice arena of the complex, with 1800m. surface. It is open all year round for hundreds of professionals and amateurs of hockey and figure skating.
Due to its technical capacity the Big Hall gives incredible opportunity of organizing different kinds of shows, concerts and international sport activities. The hall has a turning tribune that can provide additional 1008 seats in a couple of minutes. The Concert hall of 2000 seats is placed along the axis of the lobby. The empty space above the grate scene is used for rehearsal space and conference rooms. Natural light penetrates through the cabling structure of the cross vault over the main arena and the gaps between the freely hanging cantilevered wings. This creates the illusion of ease massive structures.