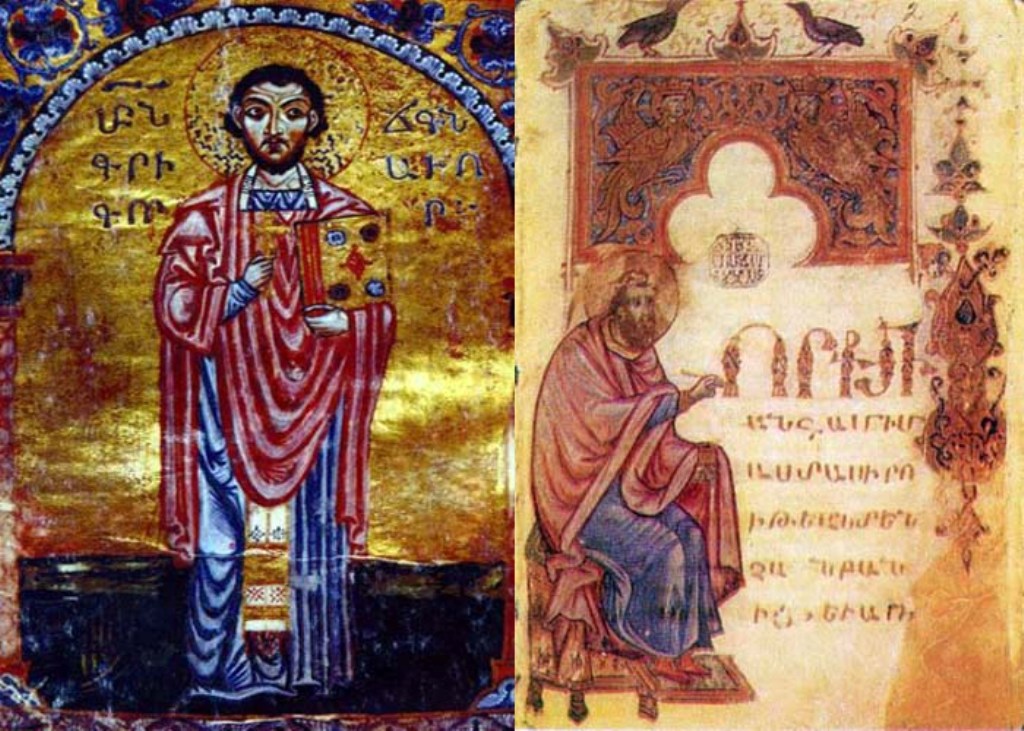 Grigor Narekatsi (St. Gregory of Narek, 950-1011) is an Armenian spiritual writer and poet, a representative of early Armenian Renaissance.
He was born in Vaspurakan (area of Van). His father was a renowned scholar and ecclesiastical writer Khosrov Andzevatsi.
Information about the life of Narekatsi is extremely scarce. It is known that at an early age he was sent to be raised in a monastery Narek in Rshtuni district. His mentor was the abbot, scholar monk, scholar Anania Narekatsi. He was not only the greatest scientists of his time, but also an extraordinary personality, a man whose wisdom and holiness were widely known. Communicating with Anania (he was also the author of ascetic teachings) and the enabling environment – the monasteries were the center of cultural and scientific life – had a powerful influence on Grigor, formed his inner world.
After completing his studies at the monastery Grigor Narekatsi took the tonsure. He is so excelled in the sciences that was appointed as an instructor of monks, and then was declared teacher “Vardapet”.
No other detail about his life outside of the monastery has survived, and one of the reasons for this is measured and quite drab monastic life. However, numerous legends associated with his name, some of which are collected in “The Life of St. Gregory of Narek”, comprising also stories about the creation of miracles. After the death  Grigor Narekatsi was canonized, was buried in the same Narek convent near the church of St. Virgin Sandukht.
The most famous work of Narekatsi is lyrical and mystical poem “Book of Lamentations” written between 1001 and 1003. It is written in grabar, the ancient Armenian literary language, which is also used in worship in the present. The text of the poem contains many biblical allusions, indirect quotations, expressions, borrowed from the sacred books. The poem does not rhyme, and yet in some portions of the work Narekatsi has used rhyme as well. The poem has played a significant role in the development of the Armenian literary language and created a number of interpretations and imitations.
“The Book of Lamentations” (also known as “songs-laments” or “song-prayers”) consists of 95 chapters. Each song starts with a characteristic intonation: ‘The word for God from the depths of heart.”
There are more than 200 manuscript copies of the Book of Lamentations. The oldest of them dating back to 1172 is kept in Matenadaran, Armenia’s public library, along with other unique exhibits.
Narek (as the poem was often called after the creator) was first published in 1673 in Marseille, and then reprinted more than 60 times. The poem was translated into modern Eastern Armenian and Western literary languages. There are translations (including, and full) in English (1974), French (1961), Italian (1874, 1922), Turkish (1904), Arabic (1980), Romania (1967, 1981).
In 2003, UNESCO has celebrated the 1000 anniversary of the “Book of Lamentations.”