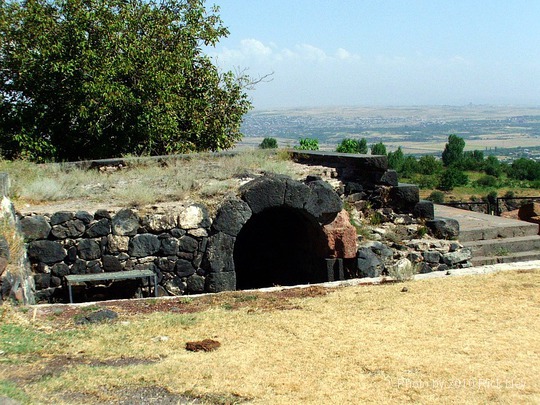 The tomb of the Armenian Kings Arshakuni, a fourth century grave monument complex, is located in the village Aghdsk of Aragatsotn Marz, on the high right-bank terrace of the gorge of the Amberd river. This is a unique structure of the IV century. There are credible reports on the construction of royal tombs in the writings of historians, according to which the burial structure was built during the Armenian-Persian War in 359. The royal bones of the Arshakuni dynasty were taken from the Persians who were trying to take them to Persia, in the belief that in such way they would remove the former force and the power of the country, and reburied in the village Aghdsk. The lower half-basement of the burial of the Arshakuni Kings represents an externally rectangle, and inside cross-shaped track with a vaulted ceiling.  It is built of black and red tuff hewn with the mixture of lime mortar. The only light tomb penetrates through a door opening. Half-obliterated bas-reliefs of hunting scenes have preserved on the massive stone pillars of the entrance.

There is a small semi-circular altar in the eastern part, and in the central parts of north and south longitudinal walls are rectangular niches, where the remains of Arshakuni Kings are buried. To the left of the entrance, according to legend, were buried pagan kings of the Arshakuni, and to the right, where the stands the bas-relief with cross – the kings, who had already accepted Christianity.

The bas-reliefs of the shrine have symbols, which are close to the ground, flowers and fruits. Everything is permeated with ancient cheerfulness. Even the cross is enclosed in a circle filled with leaves, vines, and birds.

Close to the shrine is adjoined a nave basilica church of black, yellow tuff, built in the IV century. Its ruins are preserved until nowadays. The lower parts of piers and walls, separate fragments of stones with inscriptions and embossed decorations have preserved too.