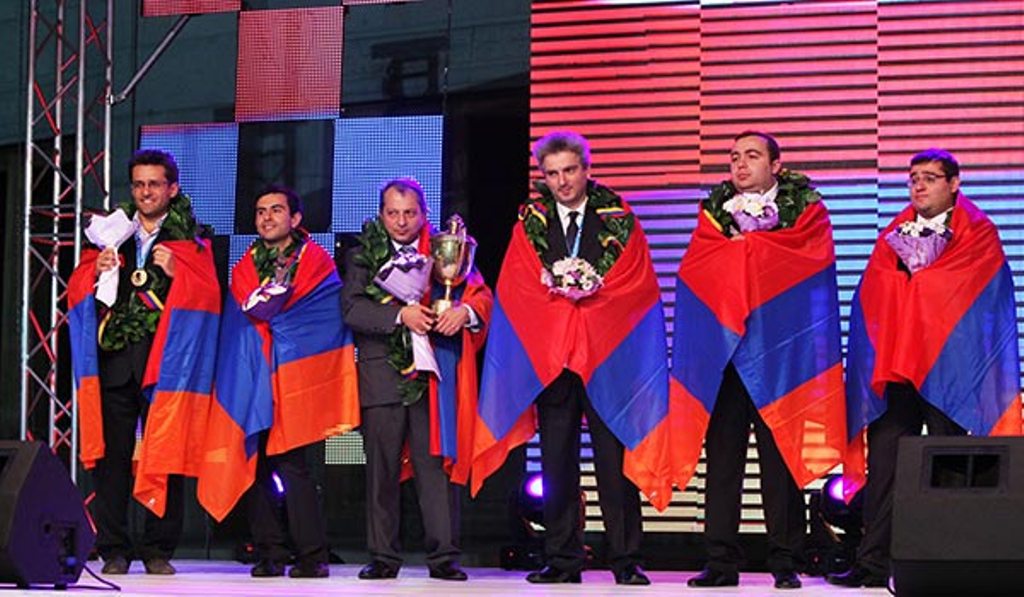 Armenians have been playing chess for centuries, since the region was part of Sassanid Persia, and the game was heavily promoted when Armenia was part of the Soviet Union. Though the population is only 3.2 million, in recent years Armenia has managed to outdo traditional chess powerhouses such as Russia and the United States. Armenia has 30 grandmasters, the rank awarded to more than 1,000 top global players, and three players in the top 100, only one less than the United States.
During the 38th Chess Olympiad in Dresden (Germany) 12-25 November, 2008, Armenia’s men’s chess team took the gold in the World Chess Olympiad, with a score of 19 points and as the only team that won nine matches. Our national men’s team members are Levon Aronyan, Vladimir Hakobyan, Gabriel Sargissyan, Tigran L. Petrosyan, and Artashes Minasyan.
Victory came after Armenia defeated China 2.5-1.5 in the 11th and final round on November 25. The Armenian women’s chess team placed 6th overall among 114 participating countries. Armenia’s men also won the previous biannual World Chess Olympiad in Turin in 2006.
“Winning the gold already feels like something we’re getting used to,” said grandmaster Levon Aronyan, first board for Armenia.
When Armenia’s Tigran L. Petrossyan beat Li Chao of China, securing the gold for his team, thousands of Armenians who were watching the final round in the Chess House, their homes and in the streets began to applaud their conquering heroes and celebrate the victory.
Mr. Aronyan drew with China’s Wang Yue on the top board. The game had been opened by President Serge Sargsyan of Armenia, who has also long served as president of the country’s chess federation. The games between the pairs Levon Aronyan – Yue Wang, Vladimir Hakobyan – Xiangzhi Bu, Gabriel Sargissyan – Hua Ni ended in a draw.
Mr. Aronyan paid tribute to Karen Asryan, member of Armenia’s 2008 chess team who died tragically and suddenly in June of the same year at the age of 28 of an apparent heart attack while driving in Yerevan. “He was our good friend and we were trying to play well for his memory,” said Levon Aronyan. Armenian team dedicated this victory to the bright memory of Karen. His victorious spirit was with the team in Dresden.
In second place in the Olympics was Israel, which took silver with 18 points after beating the Netherlands 2.5-1.5. The United States took the bronze with 17 points, after beating second-seed Ukraine with a 3.5-0.5 drubbing. This was most definitely an upset as Ukraine had not lost a single match in the tournament. Members of the U.S. chess teams included two Armenians, Varuzhan Akobian and Tatev Abrahamyan.
On November 26, when the chess team returned to Yerevan, thousands of fans had gathered in the airport to welcome them back home. The champions were taken to the Sports and Concert Complex in a festive motorcade adorned with flowers and tricolors where there was a victory concert, speeches, and an extravagant fireworks show.
Long live the Armenian chess playing!