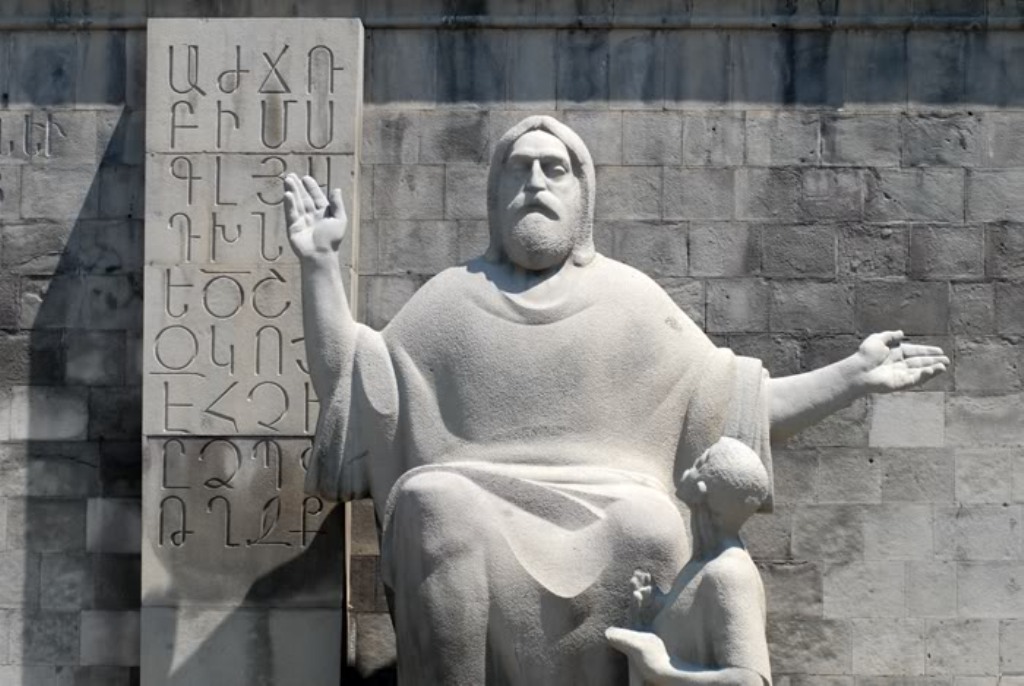 Armenia is one of the most ancient civilizations in the world. This area has been inhabited since prehistoric times. Archaeologists continue to find evidence that Armenia was among the first territories, where human civilization was founded. Mount Ararat, which is currently in the territory of Turkey, but which was part of the territory of the Armenian kingdom, is the place where Noah’s Ark stopped after the worldwide flood.

During the Bronze Age within the Armenian plateau several states flourished: Hittite empire, Mitani (south-west of historic Armenia) and Hayasa-Azzi (XV century BC) and during the Iron Age, Indo-European Phrygians and Mush people attacked and destroyed the kingdom of Mitani. Nairi also blossomed (XII – IX century BC) and the kingdom of Urartu (IX – VI centuries BC), immediately preceding the state of Armenia. In 782 BC King of Urartu Argishti I founded the fortress of Erebuni, in the north (today Yerevan, the capital of Armenia).

After the fall of Urartu, an ancient Armenian kingdom appeared in its territory. First the country is mentioned as Armina (Armenia) during the era of the Persian king Darius I (V century BC). But the Armenians call themselves Hay, and the country – Hayastan, which comes from the name of the country Aias. Greek historians Herodotus and Xenophon first mentioned Armenia in the V century BC. Xenophon, who in his famous work Anabasis, describing the retreat of ten thousand Greeks from Armenia in 401-400 BC, testifies to the fact that Armenia had prosperous agriculture: horticulture and animal husbandry, the country was rich in wine, wheat and fruit, the author describes many facts about the life of Armenian people and their hospitality.

The ancient Armenian kingdom was under the government of Ervanduni dynasty, under the domination of Persian Akemenids. Armenia was divided into two parts: Great Armenia and Small Armenia. After the campaign of Alexander of Macedon the period of hellenization of Armenia began, but soon Armenia fell under the power of Seleucids. In 190 BC Seleucid Empire fell under the power of the Romans and Armenia gained freedom. King of Great Armenia Artashes I, founder of the Artashesyan dynasty, united most of the Armenian speaking areas.

Armenian kingdom reached its peak of power during the reign of Tigran II the Great (95-55 BC), Artashesyan dynasty. When it turned into one of the most powerful kingdoms of its time, it was called by historians “the empire of the Three Seas”, as it reached the shores of the Caspian, Black and Mediterranean seas. Because of its strategic localization between the two continents, for centuries this country was invaded by all the powers in this area: the Assyrian, Greek, Roman, Byzantine, Arab, Mongol, Persian, Ottoman Turkish and Russian.

In 301, Armenia became the first state to officially adopt Christianity, due to the influence of St. Gregory the Illuminator, the first Catholicos (Patriarch), now the patron saint of the Armenian Apostolic Church. Tiridates III (238-314) was the first king, who was officially baptized together with his nationals. This happened 24 years before the Roman Empire gave to Christianity the official rule of law and 36 years before the Emperor Constantine I the Great was baptized (337).

In 387 Armenia was divided between two powerful nations, Byzantium and Persia. Armenian population was in danger of extinction. The catholicos Sahak Partev and the king Vramshapuh, who ruled the Persian part of Armenia, decided to strengthen the Armenian culture and thereby prevent the disappearance of the nation. The task to create the Armenian alphabet was entrusted to Mesrop Mashtots, king’s adviser. After years of difficult work, in 405, he created an alphabet that gave rise to the national literature. This period is known as the first golden age of Armenia.

Under Roman and Persian authority Armenia maintained a kind of sovereignty, but in 428 it was completely lost. Persia was trying to uproot Christianity in the territories that were under its domination and to assimilate them, which led to a national uprising. Armenian army, led by Vardan Mamikonian, entered into a decisive battle against the numerically superior Persian army in the Avarayr valley. Both sides suffered significant losses, the prince died. In this battle there were no winners or losers, but later Persians refused the spiritual colonization of the country.

In the VII century Persia was conquered by Arabs. The continuous struggle of Armenian people for independence ended at the end of IX century, when Arabs appointed the princely family of Bagrauni as rulers of Armenian territory, and Ashot Bagratuni was declared king of Armenia. A period of prosperity and cultural development began. An incredible flowering of art and literature led to the second golden age in the history of Armenia, due to autonomy within the Arab Empire. The reign of Bagratuni left a significant mark in the history of Armenia.

In 1045 the Byzantine Empire conquered Bagratunyac Armenia, though their power did not last long, as the Turks arrived from Central Asia in 1071 defeated the Byzantines and conquered Armenia, establishing Seldzhyuk power. Many princes yielded their land to the Byzantine emperor, in return for land in Cilicia. Many residents of Armenian regions began to move there to escape the persecution of Turks seldzhyuks, and at the end of XI century Rubenyants dynasty founded a new nation, the Armenian kingdom of Cilicia, which existed for 3 centuries.

This new state became an ally in the armies of the Crusaders, who came from Europe to fight against the Muslim threat on behalf of the Christian world. Finally in 1375, Armenian Kingdom of Cilicia fell under the power of the mamelukes of Egypt, which controlled the area until when they completely surrendered to the Ottoman Turks in the XVI century.

Since the XII century, Armenia was invaded by several barbarian tribes: seldzhyuks Turks, Mongols, the tartar hordes of Tamerlane. Seldzhyuk powers began to crumble. In early 1100, Armenian princes of the noble family Zakarian created semi-independent principality in the north and east of Armenia, which is known as Zakaryan Armenia. In 1230 the Mongol Khanate conquered the Principality Zakarian, as well as the rest of Armenia. The Mongol invasions were followed by invasions of other Central Asian tribes, which continued till the XII – XIV centuries. With each invasion Armenia became more and more weakened.

Ottoman Turks replaced the Seldzhyuk Turks, and since the XIII century, they began the conquest of Minor Asia. In 1453 they conquered Constantinople and went to the east, conquering Persia. The numerous wars between Turkey and Persia took place the territory of Armenia, until the XVII century when the country was finally divided between two Muslim states. Later Russian Empire joined Eastern Armenia itself, which included Yerevan and Karabakh in Persia in 1813 and 1828. The rest, known as Western Armenia remained under the power of the Ottoman Empire until the end of the First World War.

In 1895-1899 in Western Armenia Turkish authorities organized the brutal massacre of Armenians. In 1915, the government of Young Turks using the war situation implemented its pre-planned program of complete destruction of the Armenian population in Turkey. During 1915-1917, while the male population was destroyed, women and children were deported to the deserts of Mesopotamia, and were killed or died of starvation. More than half million victims is the result of the first Genocide of the XX century. About 800 thousand of the survivors were scattered around the world and founded the Diaspora. Armenia and its Diaspora carry a campaign, more than 30 years, seeking official recognition of these events as genocide. Every year on April 24, the day when at dawn arrests of Armenian intellectuals began and more than 800 writers, artists, journalists, politicians, doctors, businessmen, etc. were sent into the deserts of Mesopotamia and were killed, honor is brought in the memory of all innocent victims who fell from the Turkish sword.

In 1918, Eastern Armenia declared its independence, which lasted 2 years. For 70 consecutive years as one of the 15 republics of the USSR, it has a difficult path of socio-economic development, full of achievements and deprivations. Finally, when the Soviet Union collapsed in 1991 Armenia regained its independence.
With the fall of the USSR in 1989 again discussions began on the future of Nagorno-Karabakh Autonomous areas, historic part of Armenia, populated by Armenians, which in 1923 was joined to Azerbaijan by Stalin’s decision. The Armenian population of the region began a movement for reunification with Armenia. In November 1991, after the Armenians of Nagorno Karabakh decided to reunite with Armenia, the Azerbaijani Parliament decided to deny the autonomy of Karabakh, which led to the referendum, in consequence of that Nagorno Karabakh was declared an  independent state (not officially recognized). A number of conflicts led to violence and massacre of Armenians who lived in other parts of Azerbaijan. Thus, the war broke out between the two republics. Since the cease-fire in 1994, most of Nagorno-Karabakh, as well as many neighboring Azerbaijanian areas remain under de facto control of the armed forces of Nagorno-Karabakh and Armenia.

In 1990, Armenia held the first democratic legislative elections and in 1991 the first President of the Republic was elected. In 1992, Armenia joined the UN and in February 2000, she, as a full member, joined the Council of Europe.

550 BC – The mention of the Armenian kingdom in the chronicles of Xenophon.

520. C – mention of the country Arminia and the people of Armin in the trilingual inscription of the Persian king Darius I

301 – The official adoption of Christianity.

387 – Division of Armenia between Byzantium and Persia

405 – Creation of the Armenian alphabet by Mashtots.

104 – conquest of Armenia by Byzantium and the Turks Seldzhyuks

1375 – Conquest of Cilician Armenia by Mamluks

1639 – division of Armenia between the Ottoman Turkey and Persia

XVII – asking Europe for protection from the Turks and Persians

1722 – Arrival of Russian troops in the Caspian Sea

1813 – Signing of the Gulistan treaty between Russia and Persia

1826-1828 – The second war with Persia. The accession of Eastern Armenia to Russia under the urkmenchay contract

1828 – Education of the Armenian region within the Russian Empire

1849 – Creation of Erivan Province in the Russian Empire

1894 – Summer massacre of Armenians in Sasun

1914 – Extermination of the Armenian military in the Turkish army

1918, May 28 – Restoration of sovereignty, the proclamation of the Republic of Armenia

1920 –  Establishment of Soviet power in Armenia

1991 – Independence of the Republic of Armenia