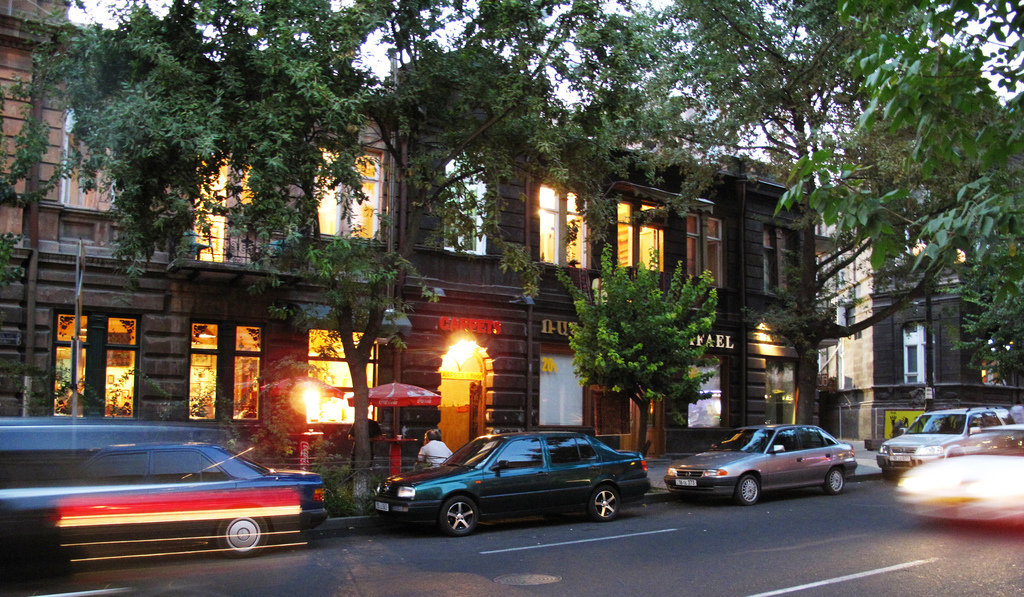 This is perhaps the most interesting street in Yerevan that stretches for 1.6 km. The street is named after Khachatur Abovyan -the Armenian writer and illuminator of the XIX century. Formerly it was called Astafyan and even earlier it was known as the Castle. The street starts to the left of the museum complex. Its first quarters (the numeration of houses starts from the Republic Square) look rather colorful – the building of the XIX century that has miraculously been preserved is close here to  modern entertainment centers made of glass and concrete. The first floor of the first house situated on Abovyan street is occupied by the restaurant Pizza di Roma. On the opposite side the Small Philharmonic Hall or the concert hall after Arno Babajanyan is located. In the building of the former central department store, built in 1936 – there is another restaurant called “Marco Polo”.

From the monument of the seller of flowers, located a little further, the Northern Avenue begins, which should connect the Republic Square with the Theatre Square. The design of the avenue was created in the Soviet times, but it has been put into practice only recently. This is going to be a modern multilevel trade and tourist area.
One of the most beautiful buildings of old Yerevan, constructed from black tuff is situated at the intersection with the Pushkin street. In the past here there was a private clinic, today Armenian Society of Cultural Relations with Foreign Countries and a number of other organizations are located here. On the opposite side, in a small building, the exposition of the Museum of Geology can be found (Abovyan, 10). A little further there is a small semi-circular area, with  a bowl of fountain with signs of the zodiac. Here the building of “Yerevan” -the most pretentious hotel of the capital is situated ( architect  N. Buniatyan, the hotel was built at the end of 1920.). It sides with the Exhibition Hall of Union of Artists ( architect  R. Israelyan). The Ensemble of the square completes the building of the “Moscow” cinema (previously in this place the St. Pogos Petros church was situated, which had apparently been built in the V-VI centuries and rebuilt in the XVII century.). This is the first cinema with two halls in the country, it was built in the middle of 1930’s and was designed by architects T. Yerkanyan and G. Kochar. From the side of the Abovyan street the first floor of the building is made in the form of loggias, behind which there is a shop. In front of the the Square the Russian Theatre after Stanislavsky is located.
Between the Tumanyan street and Sayat-Nova avenue Abovyan street is like a boulevard. On the wide sidewalks swimming pools, arbors, pergolas, benches, drinking fountains, decorative steles, vases, sculptures are built. There is a lot of greenery.
In the courtyard of the house N15 the Katoghike church is located, built in the XIII century. On the opposite side the 14-storey building of the hotel “Ani”, built in 1970 stands. Here on the sidewalk, among  three pools, the “The girl from Van” is situated which is one of the best works of the sculptor R. Simonyan. From the side of  Sayat-Nova avenue  in the same corner the “Family” by R. Kyurkchyan is located, a little lower the “Seated Woman” by T. Mirzoyan can be found. After crossing the parkland, located between the Moskovyan and Isahakyan streets, Abovyan street turns into a wide avenue. At the end of the Abovyan street a hospital and student settlement are located. From the old Yerevan only the building of the Teachers’ Seminary has been preserved here, where one of the buildings of Yerevan State University is placed. On the  opposite side, in the center of student public garden  the building of  University’s Observatory is situated ( architect  A. Tamanyan, 1930). The building of the Armenian Agricultural Institute stands above the public garden , on the opposite side rises a four-storey building (made of grey basalt) of the Medical Institute rises, founded in 1930. Abovyan street ends with an area that is rather a busy part of the city. In its center a monument in honor of Abovyan stands (sculptor S. Stepanyan, architect G. Tamanyan, 1952). In the two-storey building, overlooking the square, the Museum of Folk Art (Abovyan 64) is located. Behind the area the former Youth House in Yerevan can be found. The building is like a system of terraces, elongated horizontally at relief, above which a 14-storey cylinder rises. Once there was a hotel with 500 seats here, a universal concert hall with 1200 seats, the top floor was occupied by a cafe with 100 seats with rotating floor.

The Museum of Children’s Art, Children's gallery in Yerevan Reply

[…] gallery is located on the corner of Abovyan and Sayat-Nova streets, in the center of Yerevan, not far from St. Katoghike church, so don’t […]